Steven Schafer has spent his career helping people who have been injured find the justice they deserve. Steve first practiced with a plaintiffs law firm in Groton, Connecticut, where he represented many shipyard workers who had been injured from asbestos and other hazards of the work place. Later, he practiced with a major Boston trial firm where he was responsible for a broad scope of personal injury cases, including product liability cases involving industrial machinery, elevator accident cases, construction site negligence cases, automobile tort cases, and medical malpractice cases. Steve started his own firm in 1985.

Steve is well known in the New England legal community. He has been named by his peers to the last several editions of Woodward and White’s The Best Lawyers in America for his work as a plaintiffs’ medical malpractice and personal injury lawyer. He served as President of the Massachusetts Academy of Trial Attorneys in 1998-99 and has sat on the Association’s Board of Governors since 1987. Steve also represented Massachusetts as a Governor and a State Delegate to the American Association for Justice (formerly the Association of Trial Lawyers of America). Steve has testified on Beacon Hill and has appeared in the media on civil justice issues, as an advocate for consumers. He frequently lectures to lawyers on personal injury law, and discovery and trial techniques. He holds a J.D. from Boston College Law School and a B.A. magna cum laude in economics from the University of Massachusetts-Amherst.

Steve grew up on a working dairy farm in Massachusetts, where he learned to work with machinery and to build things, skills that he applies to many of our client’s cases. Today he lives in Dover, Massachusetts, where he is raising his two children. Steve’s late wife, Audrey Cutler, was a labor lawyer and Of Counsel to the firm for several years.

Irene Libin grew up in greater Boston and has worked as a paralegal for twenty-two years. As our senior paralegal, Irene assists in evaluating new cases, overseeing procurement of medical records and other documents vital to case preparation, and works with our clients and attorneys in responding to discovery. Irene particularly enjoys the forensic aspects of her work, combing documents for details that might otherwise get overlooked and researching medical literature. She coordinates transmittal of case materials to our experts and much of the office’s scheduling. Additionally, because of her near photographic memory of file documents, Irene attends trials, often sitting at counsel table.

Irene lives in Natick, Massachusetts, with her husband. Irene has one daughter who recently graduated from Clark University in Worcester. 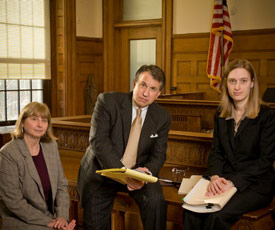 A personal injury case can hinge on a single piece of evidence, one key witness, or a seemingly minor detail that is easily overlooked. Read More